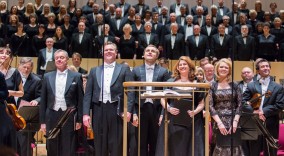 “Bryan Register sang his Turkish March with impressive lightness and agility, and in the ensuing fugue Petrenko drove some of the fiercest playing from the orchestra. This was topped only by the final Presto, which was a hurtling, furious affair led by blazing brass and some superb playing from timpanist Neil Hitt. One half expected to see smoke from the violins’ bows at the peak of the frenzy. It was a thrilling close to a powerful performance, one which was a suitable party for this very fine orchestra. Here’s to the next 175.”

“There was some fine singing from baritone Andreas Schiebner and from tenor Bryan Register, whose bright, pure tone was a particular delight.”